They're here! Yes, they took a while and we're still working on them, but now you'll finally be able to have your place to call home and make it nice and cozy! We'll begin with putting locks on doors, then we'll get to lockpicking, and end with window fortifications. This is how it works: 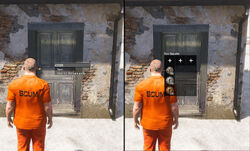 The basic lock can also be crafted.

- Duration: 2 seconds (No skill) - 4 seconds (Advance +)
- Angle difference: 1x - 2x the cone size in which the lockpick will be successful.
- Lockpick durability: 1x - 4x How much strain the lockpick can endure.

The improvised lockpick has 1 use and a regular lock pick has 5 uses. If you fail to lockpick in time, it will take 1 use from your lockpick.

== Winter Wonderland! The winter season has hit the SCUM island bringing snow with it. This is how it looks now!

That's not everything, though - you'll also be able to do all sorts of awesome stuff!