Because you need to see what you're shooting at. And with the darker nights we thought that would be a nice addition to the game!

For the improvised flashlight you need to have:

Also to the answer "Why did you add just weapon flashlights, and not a normal flashlight that we can use?" Well, that's also in works but we need to adjust a lot of animations for that. So that will take some time.

We did some tweaking with the night time, so now it should be much darker and prettier as we reworked all of the light sources in the game as well. Have a look!

In the last few months we were actively talking with the Croatian Military regarding SCUM and how can we improve it and make more realistic (sounds, animations etc...). The whole military personal was super cooperative with us, and here you can see some fruit of that partnership!
Un-suppressed weapon sounds now consist of more layers of sounds then before:

Since all of the weapon segments have their own audible distance, it will be easier to pinpoint gunshot origin and distance.
Also weapons which didn't get updated:

And this is just the beginning! 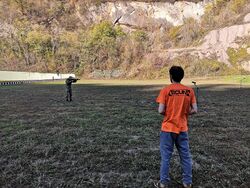 There are 2 new pieces of clothing that you can find around the island. A new jacket and a new stab proof vest.