You can't sit with us.

We worked hard in this department as well and here is what we did:

You will be able to notice the FPS boost in bigger cities and FPS drops should be minimal from now on, as hundreds of objects are being much better processed and loaded than before. Players with slower CPUs and better GPUs should feel the biggest difference.

The first iteration of base building will allow you to build your own bases with simple defenses and some functional items. In the following weeks, we'll add many more functional items to build inside your bases, like generators and work benches. 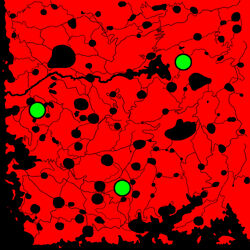 You can build in the red space.

Knock before you enter

Keep those nosy neighbors out of your yard.

A vacation house for the whole family...

...Let's see those kids try to escape from here.

Guess what! We have overhauled the inventory system! Most of it was modernizing the system to better acomodate the new inventory-related requirements. That also means that our programming team will have a much easier time implementing things from now on. It also brings massive chest and car inventory related optimizations, as well as a GUI redesign. Without spoiling too much - stay tuned for more inventory-related goodies!

Well, you know, it's hair and beards, and now they can grow, go to school, get married, move out, and then they leave you all alone with an empty nest and a hole in your chest. Okay, not really. They just grow. 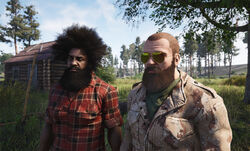 We are introducing our new missions system! We're starting with some tutorial missions so that the newcomers to the survival genre can learn the ropes.

Crafting? Crafting! A man is judged by his skill with his tool.

SAFE ZONES ARE UP AND RUNNING!
And what better way to open them than with a party?
"Wait, there's so much to implement and they added a f****** disco of all things?"
If that's your question, you're probably new here. Don't worry though, we'll catch you up!

You'll find me in da club.

Don't try to hide here if you shoot a certain guys dog.

"Sorry sir this is for VIP only."

It has better security than our servers.

Safe zones are called that way for a reason. If you are in a safe zone, you can't be killed in any way from inside or outside and you also can't kill anyone from a safe zone.
Also the music you will hear down there is provided by our awesome friends from F.O.R.M

Our art team has made another castle. We're not sure what their deal is. They've been working really hard, so it could be that they're dreaming of building sandcastles on exotic beaches or they just like playing with dollhouses.
Either way, it's really cool and you should go for a visit!

This is the castle of my master, Guy de Loimbard!

It really does look pretty tho.

Yeah, I wouldn't drink that.