Now you will be able to encounter military and police puppets.
Right now there is no big difference between normal puppets and the military police ones. By default they drop better clothing, and the puppets with body armour are bit harder to kill, due to the body armour.

We reworked MP i SP times for spawning puppets.

Interior zombies will have bad hearing to stop them from reacting while walking down the street, and reacting right away, now they will sleep until you enter their house and make some noise. 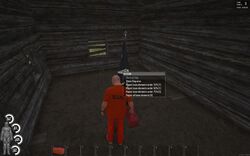 The number at the end is the total uses needed